Bitterns – “kings of the wetland’ 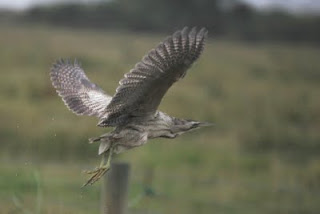 Duck shooters are advised to take care not to accidentally shot a bittern during the upcoming season. These large birds are an endangered species and listed by DOC has “Nationally Threatened” and are fully protected.
Bitterns have evolved a streaked brown and black plumage to camouflage in with reed beds. The birds are about a kilogram in weight, half way in size between a mallard and Canada goose, but have a large pointed bill. Bittern often startle you as these large birds will flush out of the reeds at short range.
Bittern (or as they are known Matuku) have benefited from waterfowl wetland enhancement work done by Fish and Game and private individuals. But with over 90% of our wetlands drained the bittern have over all declined. Bittern are very much a bird of our larger wilderness wetlands, but are often sighted in drains and on farmland from March to June.
Although common at the Whangamarino wetland are bittern are quite scare and spread out though much of the country with a nationwide population of around 750 birds. If any shooters sight bittern or have photographs of bittern I would be keen to hear from you as I am collecting bittern records for a national database to assist with the conservation of the species (email – langlands@xtra.co.nz).